I celebrated my birthday like any self – respecting 31 year old should, with a party! …with 16 preschool kids.  Holla!  Ok, well maybe it wasn’t the party of the century but it really was cute.  When I walked in, all the kids were sitting down in a circle and at once they all yelled HAPPY BIRTHDAY MISS NATALIE!!!  Then they all jumped up and ran over to give me hugs.  Very sweet but little over powering.  I had to grab the wall so I wouldn’t fall over on top of them.  There was birthday banner strung up and this is what the white board looked like:

Apparently ‘E’ is a favored letter with someone.  Later in the morning they sat down again and handed me cards they had brought or made.  Here were some of my favorites:

I was told the drawing in the top left card is a picture of me, the red lined drawing in the card underneath is a picture of a house (floor plans maybe?).  In case I am ever curious about who sent me the card on the top right Anna made sure to write her name in it over and over, only she spelled it Anno and Aiden just might be the next Picasso with another self portrait of yours truly in the bottom right card.

When Anna handed me her card she was positively beaming.  Not only was I presented with a card but with this:

I know what you’re thinking because I thought the same thing.  EEK! Creepy!!  But according to her mom, Anna felt I just HAD to have one of her dolls and wouldn’t be consoled until she was granted permission to bring it for me.  The sentiment is very sweet.  The doll however, well, is not.

For morning snack my mom had brought over cupcakes with plastic rings sitting on top. 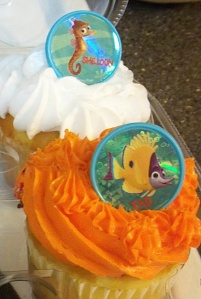 Unfortunately I didn’t think to take a picture until most of them were gone.  I don’t know what kind of dye was used in that frosting but it stained fingers and faces.  Hands down the messiest cupcakes eaten at the preschool to date.  But they were so much fun! 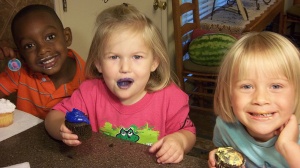 Here we have Jeremiah who was so kind as to draw my picture in his card, Anna the doll giver, and Haley.

The little boy in the red shirt on the right is the one who designed my future house in his card.  I know neither one of these pics makes it look all that messy but trust me.  These were taken within seconds of them receiving their cupcakes and the rest of the time I was on frosting control.

As soon as the cupcakes were finished and kids were cleaned we pulled out the playdoh.  Another totally messy activity that’s a pain to clean but fun never the less.  And as soon as I had scraped off the last piece of playdoh from the kitchen floor it was time for lunch.  What could we possibly eat that would top the mess of cupcakes and playdoh?  Oh yeah, spaghetti.  On the positive side, no one had dyed purple and blue fingers and faces anymore.  Instead they were all orange.  It looked like we were holding oompa loompa try outs in that kitchen.

This was hands down the best work birthday party I’ve ever had.  I really wish this last picture wouldn’t have turned out so blury.  But I didn’t have my camera and this was the best I could get.  Here are my kiddos: