So if you pay attention to the national weather you know we’ve been getting severe storms down here in the south.  About a week ago we got some crazy, intense wind and this is what it did to our fence

This is just what the wind did.  The fence posts have been snapped and since I took this picture that other panel has fallen.  Monday I was sitting in front of the computer minding my own business trying to type a final paper for class, when my brother came in letting me know the tornado sirens were going off.  I’d heard the siren but was so concentrated on my paper I kept thinking it was an ambulance or a cop car.  The sirens ended up sounding not once, not twice, not three times, but FIVE times in a 3 – 3 1/2 hour span because that’s how many tornadoes/possible formulating tornadoes there were.   And all of them followed the same path through the state. 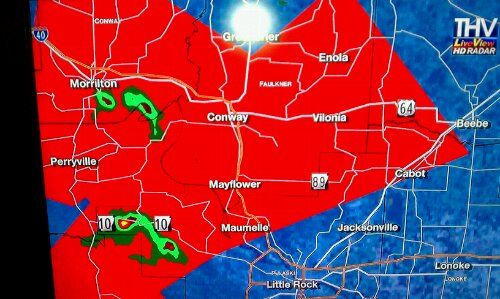 I happen to live in Conway located in the middle of the screen.  As you can see one tornado skirted around the north part of the town.  At the same time that was happening, that tornado forming to the south ended up making it’s way up going between Conway and Mayflower and it was this tornado that demolished the town of Vilonia just to the east of Conway.  To give a little perspective on distance, Vilonia is within 10 miles or so from my house.

I took video on my phone with the intent of posting it on here but it won’t upload (go figure).  But it was video so you could hear the sirens sounding and the announcement telling everyone to go inside.  What you can’t really tell from the video is how greenish yellow the sky was and how eerily calm and silent everything was.

The other video I took was showing the street right in front of my house and how flooded it became in a matter of minutes.  This was due to the tornado passing over us and on its way to Vilonia.  I did manage to snap a couple of pics though 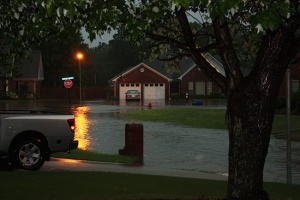 I’ve seen plenty of photos showing the aftermath in Vilonia and further south in the Hot Springs area that was also hit extensively by tornadoes and all I can say is we were so fortunate at my house to not experience more damage than a fallen fence.  I know a handful of people that got hit pretty hard and lost extensive amounts of their home and property.  Here are some shots that I got from friends or from the Arkansas Severe Weather page: 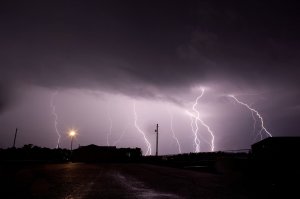 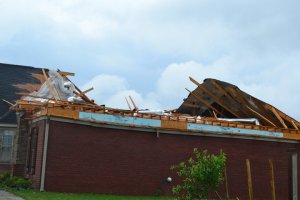 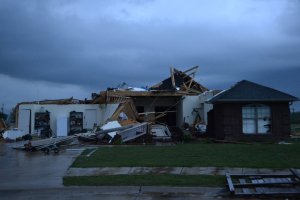 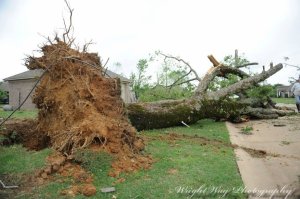 Last night we had severe thunderstorms and the sirens went off again but as far as I know, there wasn’t anymore extreme damage done.  I thought we had seen the last of it last night but as I left work an hour ago this is what I saw

To the east it looks like a perfectly nice and almost sunny day.  To the west it’s dark and creepy.  I ended up driving home in a torrential downpour but it has since stopped raining.  It’s overcast and the wind is blowing really hard but maybe this really is the last of it.  I hope so.